Last Monday Sonja, my Belgian next door neighbour, and I went to Hatshepsut’s Mortuary temple on the West Bank of Luxor. It is still hot here in Luxor, for November, but we were not expecting it to be quite so hot!  The good point though is that there are fewer tourists, due to all the unrest here! There were a few busloads of Tourists on a day stopover from Hurghada, and they were definitely dressed for the beach and not the temple, but once they had spent their half-an-hour they all left on their buses again, leaving us the privacy of the whole temple!

Initially we went straight up to the third level but ended up being hassled by the ‘guides’ there, who were trying to show me ‘Ramses’ image on the temple walls and Hatshepsut’s cartouche! Never believe these guides! They know next to nothing! I overheard one guide, who was taking the Russian tourists from Hurghada around, that an image of piles of cinnamon bark, and other woods, from Hatshepsut’s trip to Punt, was Henna! Good lord!

Anyway, we entered the top tier and Sonja immediately felt the energy there. She had had a fascination with Hatshepsut since she was five years old but had never visited the temple. This was her first experience of energy too! She has been attuned to the Gaia Method to the second level but has never done any site work yet…until today!

Because the Egyptian ‘guides’ wouldn’t leave us alone, and were constantly trying to show us things for baksheesh, we decided to go downstairs and look at the the second level instead. I took her to the Hathor Chapel first, but  there was no energy discernable. That was unusual as it is usually quite active. When we were finished there we went to the other side. This is the Colonnade which describes Hatshepsut’s trip to Punt and beside it stands the temple of Anubis. For the first time since I have been coming to this temple, nearly eight years, the Anubis temple was energetically active!

We decided to tune in here and see what was going on and as soon as I closed my eyes I saw a black energy line move from my ‘centre’ and connect to my husband’s centre. The Black line is the female energy line which runs through the earth and is one of the Spider Mother’s two lines, the other one being the masculine red line. I saw my husband being placed in a a three-layered pinkish sheath, which looked like three layers of lotus petals. He was placed in the centre of them and then they closed up around him. He was then placed, cocooned in this sheath, into the waters of the Nile. It reminded me of Osiris when Set placed him in a wooden box and sent him floating down the Nile. Then the image faded. 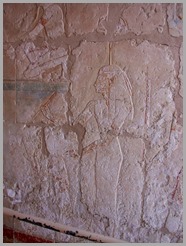 We found a nice image of the Goddess Seshat on the end wall, giving her energy to a kneeling figure in front of her. She is the Goddess of Wisdom, writing and architecture and inspires people to write, create and design. This suggests that the design for the temple itself was ‘channelled’ by Hatshepsut and/or her architect. Seshat is also Goddess of Sacred Geometry and is always invoked when the temple foundations are being planned and the Laying of the Cord ceremonies are being carried out. These ceremonies are not purely about the physical building however as the laying of the cord is also the laying of the energy lines which stretch between the temples, joining them in a grid of light.

For all the years I have been coming to this temple I have also never been to the lowest level.  It seems to be an automatic thing when visiting here that you walk up the ramps to the higher levels. Everyone does it! But this time I wanted to check it out. Once we had walked down to the colonnades on the ground level, beneath the Anubis Chapel, we could feel the energy buzzing here. It felt like the energy source of the place, the earth power place. The art on the wall also seemed to echo this, with Hatshepsut portrayed as a sphinx, symbol of Earthly power and cows being used to plough fields, but being held by ropes, one for each cow, and each rope having a small ankh at the end. This shows how the earth itself was ploughed using ‘light’ to ensure fertility ,good crops and new thoughtforms. I really liked the energy here. 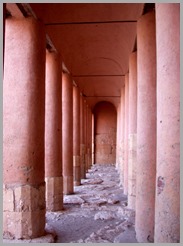 Next we went around to the other side, beneath the Chapel of Hathor, but yet again there was no energy here at all!  This part of the temple is completely different too as it is painted red and has mud brick domed ceilings, and brick and mud brick pillars.  This is later construction work , replacing the older pillars, and even though it is completely different to the rest of the temple as a result, it was still beautiful. 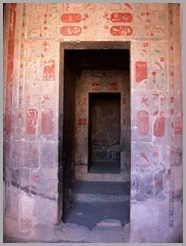 As there were now no tourists we returned to the top level again. Sonja had overheard someone mentioning it so we followed the ‘clue’ and returned to the Sanctuary of Amun. This was originally built to receive the barque of Amun as it did its’ tour of fertility’ duty once a year during the Valley festival. This is also where the sun comes in at the  Winter Solstice. 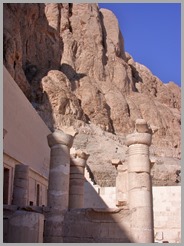 (As I was writing this up and watching a video of the sun, which I had shot while in the temple for the winter solstice, I found my energy ‘raising up’ and so I tuned into it. I made a connection to the centre of the sanctuary and the saw Hatshepsut, as priest, taking a golden cup filled with communion wafers from a tabernacle at the back where the sun streams in. She then took this golden chalice and brought it outside, laying it on the ground in front of the sanctuary entrance. A beam of sunlight poured into the bread in the chalice, charging it with solar light. Once this was done she picked it up and carried it out and down to the next level, then entered the Hathor Chapel and gave a piece of communion to the waiting priestesses there. When she had done this she then walked around to the Anubis chapel and there her priests were waiting for her. She gave to each of them too a piece of the the solar-charged bread and then she left the temple, followed by both priests and priestesses, and walked to the end of the terrace. All of the priestesses of Hathor stood to her right, in a line, and all of he priests of Anubis stood to her left, also in a line. Together they faced the Sun, giving thanks that fertility would once again fill the land of Thebes. They all bowed to the Sun in gratitude and acknowledgement, and the ceremony was complete. This is obviously an energy working to be done at some point as the Tabernacle represents the Holy of Holies/the Sacred Heart, and the chalice is the Divine Feminine energies. The communion is the bread of the Mother, which, when charged with solar light, feeds the land and its people. When you eat the communion you become one with the God/Goddess, filled with bounty and fertility.)

When we arrived upstairs again we had the place completely to ourselves. We stood in front of the Sanctuary and we could both feel the energy again. I guided Sonja into a short meditation to see what she would receive. Her guides placed a rod through her body which went deep into the earth. Above her head a large green eye sat atop the rod, and from this eye a shaft of light shone into the Sanctuary.  Then a Divine Woman emerged from the Sanctuary and in her hands she held a white sphere, which she gifted to Sonja. It was a ‘gift of light.’  And that was the end of  that.

We spent a little more time walking around the temple grounds, as I wanted to see the sun go down over the temple. We also had a cup of coffee at the cafe before it closed and the guy working there was an old friend of my husband’s, so not only did we not have to pay for the coffee but he also gave us a key ring each as a gift. On the key ring  hung a golden image of Tutankhamen. So we figured that was to be our next destination; his tomb in the Valley of the Kings…and the Tomb of Ay! Let’s see what happens there…