I finally learned how to prepare our own wheat for making into flour. It was not as difficult as I thought it would be. Listening to Omar it sounded like quite a production but it took a half an hour to clean and a few hours to dry!

This was the wheat which we grew last year and which the family ended up with most of, as usual! I wanted my own grain as we had paid for it and produced it. I was tired of having to be a beggar when we provide it all! Ludicrous. So we brought a large bag upstairs to the flat and I washed enough to keep us going in bread for a couple of months.

This entailed rinsing the wheat through a large sieve to get the soil out. Omar told me to wash it all in our plastic laundry bin but this didn’t remove the soil so I used our sieve instead. It took longer but was much more efficient. 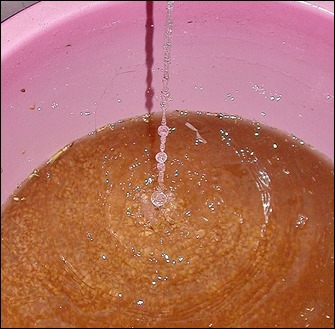 Once I had washed enough I laid it all out on a sheet on our bedroom floor, under the fan, to dry. Omar came in and said it needed to be in the sun. I didn’t agree. My father owned a corn factory when I was a child and he used drying machines to dry it. I was pretty sure that if I left the warm air coming in through the window to be circulated with the overhead fan, that it would dry well enough for the mill! It did! Omar took it later that evening to the local mill and picked it up the following day. 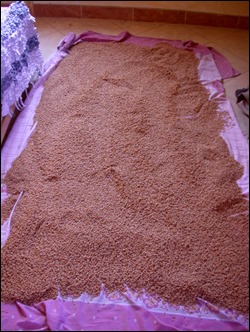 When he came back he was thrilled. He said that the miller had commented that the woman who prepared this wheat did a brilliant job, that it was exactly as it should be. The flour was fine and good enough for cakes. The removed wheat bran/germ was also as it was supposed to be. The miller was also a little surprised as the wheat they normally got from our house was way too dry. Here, the women wash it and put it in the hot sun to dry, which leaves it hard, dry and brittle. The bran that is removed is then used for a base to place the rising dough on so that it doesn’t stick. They don’t actually eat it!Needless to say Omar didn’t mention that his wife had done it. He takes the credit for all my work! God forbid a woman should be smarter or more successful. Egyptian men!

Omar was so pleased with the flour that he took some down to his mother for approval/competition. Never a good move. I knew it was only a matter of time before there would be consequences for bragging!

That came yesterday. It is the big feast in a couple of days and the women all traditionally make Fiteer. a thin flat bread baked in the oven. It is Fiteer when it is thin and crispy, but Grus when slightly thicker, and layered with oil! However, they had stored their flour badly and beetles had gotten into it, so they wanted some of mine! Every time they are careless with their food and they know I have some, they will just ask me, or rather Omar, who then gives it to them. I was not happy. Normally, when their flour has beetles they sieve them out, so what was different about today? The difference was they knew I had good flour! 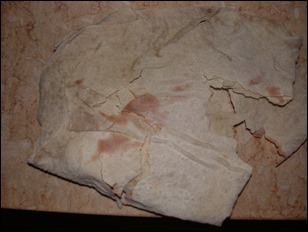 Like a ‘good wife’ I gave them a week’s worth of flour, and told them how to store it so that it didn’t get ants or beetles in it. Why am I, an Irish woman, telling Egyptian women how to store flour they have been storing for  years – badly? Don’t they know this stuff already?

Later on Omar told me that the wife in question had complained that the flour I had given them was not enough so they mixed it with the other flour, which they sieved to get the beetles out, as they normally do! I told Omar that never again is he going to brag about anything that I produce because these women are just downright ungrateful for everything!

I am glad though that I learned how to prepare our own wheat, because when we do have our own place I will know how to do this stuff. However, now we have to keep everything quiet when we do something well, or get anything new.  If we don’t, they demand it all and then ‘send me to Coventry’ if they don’t get it. Personally I’d rather be in Coventry. Its a lot more peaceful there, but it does make me feel sad that they take us so much for granted. These dynamics can make it a pretty lonely place to be.

Bettaw is a traditional, Egyptian sourdough cornbread, but one that you do not see made so often today. It is one of those traditional breads, which seems to be dying out as more people eat wheat bread, especially the nice soft white rolls that you can buy from the local bread-makers. 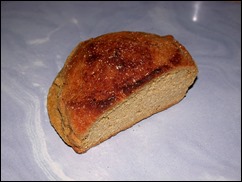 My mother-in-law was once famous for making Bettaw. When she baked it in the clay oven, where the women here all make their bread once weekly, it could be smelled for miles around and all of the neighbours would beg for just one round! One old neighbour was given three loaves and he ate it a little at a time, everyday. When he died, his daughter was cleaning his room and found a cardboard box beneath his sofa-bed. In it was his last remaining, hidden,Bettaw loaf, as hard as a rock.

Now that we have found the last remaining corn grinding mill in Luxor and we are growing our own corn, Mother was happy to be able to make it again. However, after two tries she gave up in frustration. It just wasn’t doing what it was supposed to do, the oven was too hot…she felt dizzy etc. She became depressed and took to her bed, the oven was working against her…It has been six years since she made it last. To her it was a disaster, to me it tasted delicious; the second batch being better than the first. There was far too much emphasis on how it looked rather than on how it tasted.

I decided to do some research online to find out how to make sourdough cornbread, as trying to decipher Mother’s rather secretive info on how to make it, was risky at best. I mainly found recipes, which also included a commercial yeast and white flour; but this Bettaw was basic stuff, with nothing fancy in it. Basically, Mother took some cornmeal and added water to it; she let it sit for a few hours, then she added it to a large pan of corn and water mix with a little salt and left it to prove. When it had begun to crack on top, she took a large wooden spoon and made medium-sized loaves with it, putting some cornmeal on the bottom to stop them sticking to the oven floor. It cooked pretty much as you’d expect cornmeal to cook, hard and dry. I really couldn’t see what they were all going on about! But, it was a dying tradition so I wanted to see if I could figure it out!

First, I needed to understand the whole sourdough thing, so I made up a batch as Mother had made it. I also made a white flour batch. The following morning I inspected it, the white flour starter had lovely big orange spots of bad bacteria on the top, and smelled foul, so out that went. I started again with a jar, instead of a stainless steel bowl. I threw away the cornmeal starter because it too smelled ‘ill’ and started another one in another jar. This time I let them both sit on the counter in my hot kitchen for a few hours but then put them both in the fridge after a few hours of bubbling fermentation.

The following morning I checked them and they were still fermenting, probably because of all the power cuts we have been having thanks to this countries wonderful inefficiency! Everything else was going off in my fridge but it was perfect for my sourdough starters! I fed them both, left them out for a few hours again, and then popped them back in the fridge.

This morning I mixed up my cornmeal, salt and water and added the cornmeal starter, then left it for six hours to do its thing, whatever that was supposed to be! After six hours it had risen and was smelling sour; the top had begun to crack and I had heard Mother saying that that was when you knew it was ready. I decided to try it two ways. I put half of the mix gently in a loaf tin, and spooned loaves with the other half.

Still experimenting, I had no idea how hot the oven was supposed to be but my oven is a Chinese joke and it has taken me the three years I have been here to master it so…I just did what I normally do when making Irish soda bread. I have to be really careful as everything burns in the metal trays and loaf tins if I have it too high, so I have to keep it low, and I can’t have it so low that the bread doesn’t cook at all. A tricky business. 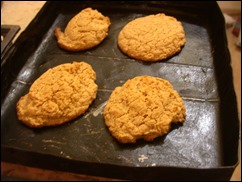 But they cooked. They look nothing like the traditional Bettaw but they do taste rather delicious with butter and honey, and are not dry. They also have a lovely sourdough taste I have my starter on the go so I will try letting them prove in my muffin tin next time to see how it makes a difference. I’ll also try it with less water and see if I can get it the same as mother’s, then it will look like Real Bettaw! Getting the natural yeasts to work is going to take some practice but I’ll get there. This bread is far more nutritious than the wheat flour bread, as all of the germ and bran is removed from the wheat, but it is left in the cornmeal, and we get two crops of corn a year, which also feeds the animals so a win-win for sure. I’m going to get some Hopi blue corn seeds and grow them here and see how we get on with those.

Hmmm – Blue Bettaw. Sounds interesting, and if the man who owns the corn mill decides to give it up We’ll buy it from him. It is far too valuable to lose! I’ll have to get Omar to take some photos of it next time…or I might just go with him­­ – .