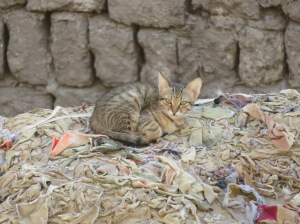 One of the next-door kittens asleep in a pile of fabric on the roof.

I’ve been back in Luxor for three months now and spending most of that time in my flat, weaving and downloading. I have detached myself from the goings-on downstairs as I knew that I would be relocating and didn’t want to get involved with the dynamics here. I have done what I could and now it is time for a change.

But there have been good changes here. All of the women now have their own bird-houses and they keep pigeons, rabbits, ducks and chickens, so they can make money and feed themselves. They are more independent. There are now four cows, with ours being due to calve in two months,  and we still have our four sheep, some of which are hopefully pregnant. Fatma, Mohammed’s wife, sold her wedding-gold and bought herself a cow! Smart woman!

The men have turned our small field by the Nile into a banana crop, with Berseem (Clover) beneath it, so that the animals can be fed. The big field is still sugarcane, but they will use the money from the bananas to grow more banana trees in two years, so all is going in a good direction! 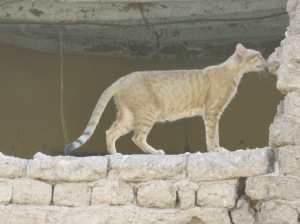 Mother of the wild kittens.

Because it is so hot, I spend most days in my flat, psychologically preparing to move back into a completely different lifestyle, but a lifestyle I am familiar with. I tend to wake up at the early hours and take photos from the balcony, and I am aware of ‘winding down’.

One of the things I have been doing is taking photos of the wild cats here. I am not particularly a cat-person, but I do feed them my scraps. I have always had cats, but they were usually because my daughters convinced me to rescue them from some perceived harsh treatment. They knew me too well!!

I realised, after a week of photo-taking, that there might be something I was missing. The Messages! This became clearer after last night… 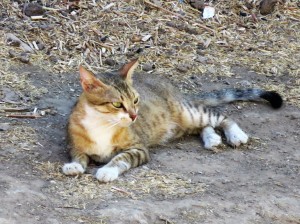 Mother of three kittens in the mudbrick makers yard, next door.

Last night we went over to Najat’s house (Omar’s big sister) and we brought around a gift of a chicken and a few kilos of veges for the Eid Celebrations. I went into her mudbrick, open-to-the-sky kitchen, to wash my hands and discovered that she had another kitten! It was tied, by fabric around its neck, to the ladder which leads upstairs. Her other kitten is just 3 months old. She untied the new kitten at my request, but oh how rough she was! That little creature was pulled and jerked and man-handled, as Najat untied the rag. The kitten has not been weaned and had an eye infection! She was tiny. Najat told me that Omar’s brother Taher gave it to her. I remembered then that his cat with the beautiful blue eyes had had kittens a couple of weeks ago. I couldn’t believe that Taher had given away such a young kitten, but I don’t know why I should be so surprised!

Once she had untied it I picked it up and sat with it, stroking it giving it some healing just to soothe it and make it feel more nurtured. In order to stop the kitten needing milk Najat told me that she rubs green chile on her nose and lips, and proceeded to demonstrate! No wonder the kitten has a bad eye. Najat thought that that was a perfectly normal  thing to do. I was horrified! 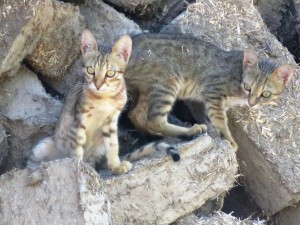 While Najat was sitting chatting to Omar and I held the kitten on my lap Najat made a comment that the kitten never sat on people, she always ran away. I answered that if I was treated as harshly as the kitten was treated I would run away too! Najat laughed. She didn’t take offence.

“Wallahi Sah, that’s the truth,” she said turning to Omar, ” You see? She is teaching me how to be better.”

Eventually, the kitten got down and started running after the other kitten. They both disappeared under the wooden couch that Mahmoud, Najat’s husband, was lying on watching TV.  Then, a few minutes later they reappeared and the older one, still a kitten herself, lay down on the clay floor and the baby kitten tried to feed from her.

I watched this tiny pair, the baby trying to find a teat to feed from, and ‘weaving’ on the body of the older one, who was patiently allowing her to, even though it obviously made her feel physically uncomfortable. She mewed a few times in discomfort but never stopped the baby. There was this lovely silent communication between myself and the older kitten, a communication which was both energetic, and ‘cat-language’ with our eyes; something I learned when I was in my late teens. I felt her instinctual caring for this baby, and even though it was uncomfortable she knew it gave the baby something it needed, so she tolerated it, without fighting or complaining.

Najat stood up abruptly to get something  and the pair ran off to hide. 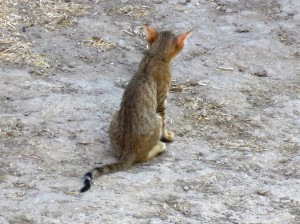 It was only this morning, watching this tabby mother with her three identical kittens, that I suddenly thought of why I was feeling so cat-ish lately! I was being shown something of importance. Something about motherhood, and foster-motherhood, and the sacrifice of motherhood, and how it is when there is no mother. It also brings up older issues about my own children and our personal family history.

Najat offered me the small kitten but I am moving to a place where cats are not allowed, so I had to say no. But if I hadn’t been moving, I would have taken her. It was hard work watching her being so mistreated by Najat, who is generally a loving, compassionate woman, but this does not extend to her animals. They were never taught to love animals, they barely love each other! But these kittens this morning, frolicking in the shade, made me realise how important it is for animals to stay with the parents for as long as possible, and Upper Egyptians do not think like that. Sadly!

Perhaps it is another thing to change… 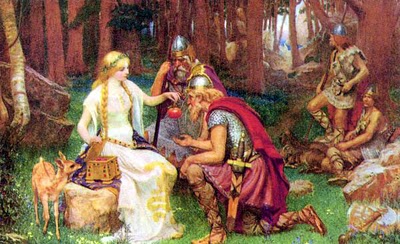 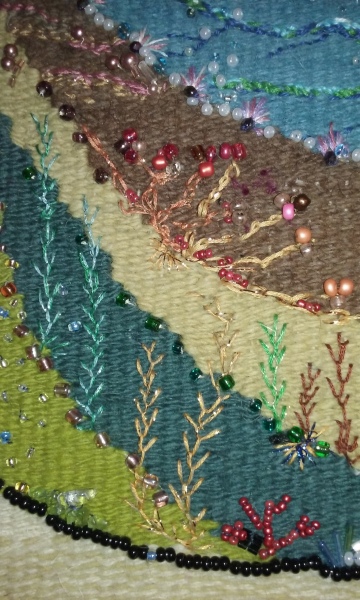 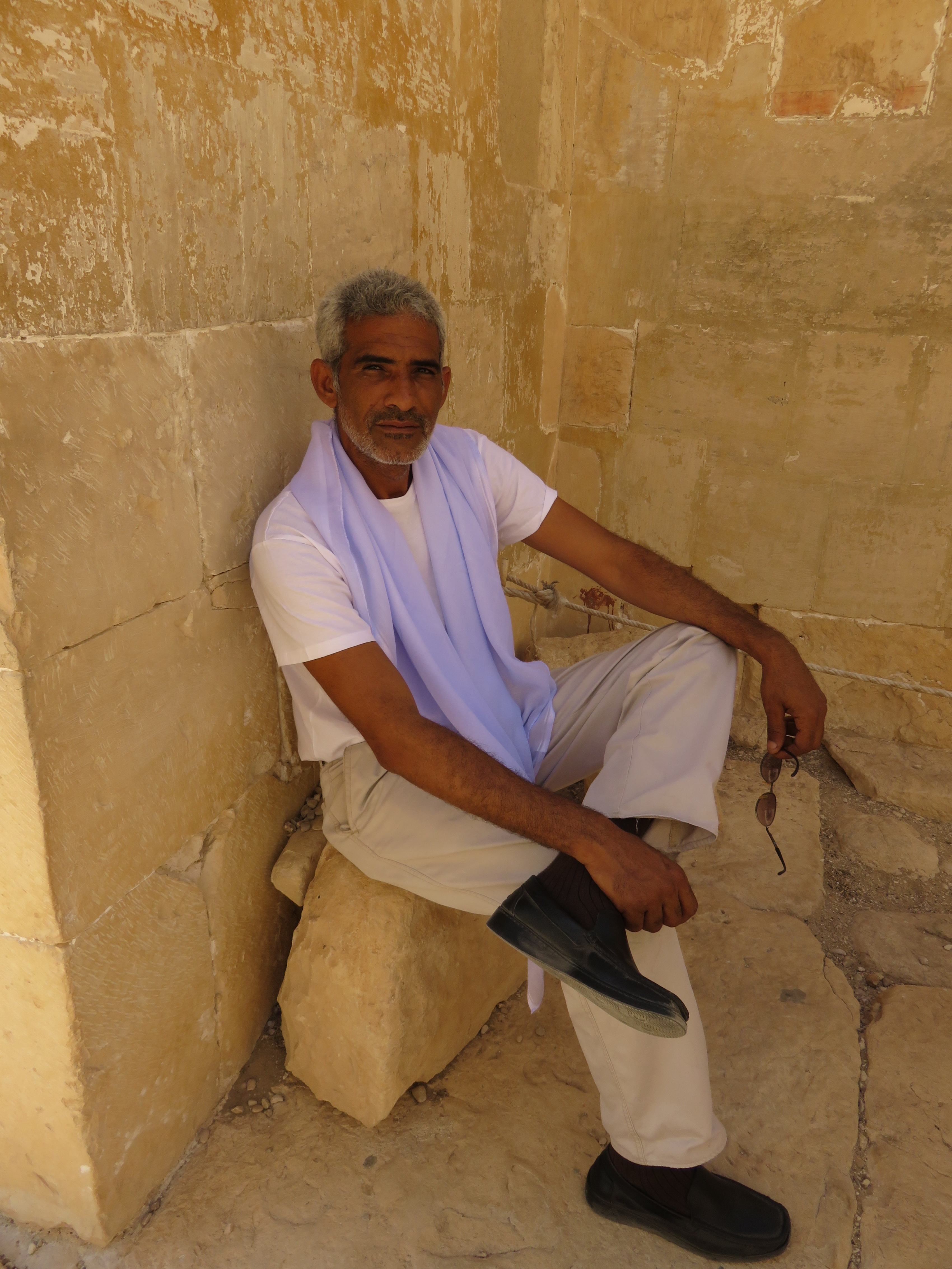