I had my first experience of the Brookes Hospital for Animals in Luxor this week!  Our next door neighbour here in El Gourna, a village close to the Seti l temple, has a working donkey which brays pretty much regularly throughout the day! This is a working donkey and in good health, but soemone took a dislike to him for some un-neighbourly reason and damaged the donkey’s hind leg. (We named this Donkey ‘Brian’, as in the ‘Life of’ Brian’ as every-time we had a question the donkey would answer it by braying at just the right moment!!! )

It looked like the damage to Brian’s hind leg was quite bad and it looked like the bone was sticking out of his leg. The owner of the donkey just assumed that the animal would die as that is what usually happens when an animal is hurt.   The owners do not have the money or the knowledge to take any other actions!

I watched this donkey for nearly a week and there was no sign that it was getting any better so eventually contacted the Brookes Animal Hospital who look after donkeys here in Luxor. I was a little concerned that I would appear to be interfering, but the animal was in pain so…I sent them an email and explained the situation. I said nothing to anyone else, leaving it up to the ‘powers that be’ to see what would happen. 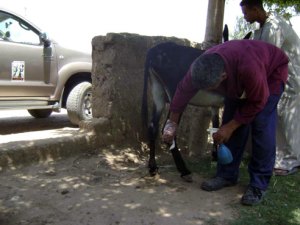 The following morning I received a phone call from a number which was not on my list so I did not answer it. I told my husband and he rang the number, checking to see who was ringing his wife! It was the vet at the Brookes hospital asking about the animal. Omar explained the situation and the vet suggested that we hire a van and take the animal over to them as it would be better for them to put the animal down if its leg was broken and that they would dispose of the body hygienically instead of it being dumped in the Nile or in the desert! . They would pay 100LE to cover the costs. But my husband remained suspicious, as locally it is believed that these animal charities are just a cover for buying cheap meat to sell to restaurants and zoos! Is that really lamb you are eating???

The following morning we received umpteen calls, none of which we answered, as no-body trusted them!!! However, the following morning we received a call from Omar’s brother downstairs saying that there were animal doctors here treating the donkey and that the animal’s leg was not broken but actually mend-able and that Brian would be fine in a week!

What amazed me was how he managed to find us!!! All they had was our names and the village and its like a rabbit warren of houses and streets here. They did a minor operation on the leg, cutting away the damaged tissue and sewing it all up again. They gave him a shot of antibiotics and dressed the wound, issuing instructions on how to care for the wound for the next few days while it healed.

The owner was really happy that his donkey was not going to die after all as it was a good, strong donkey and regularly helped them with the suger-cane and maize harvesting! Brian slept off the anaesthetic and was a bit groggy for a while but within hours he was up and eating again, none the worse for wear!

But we still couldn’t figure out how the vets had managed to find us. It turns out that they drove to the village and asked for Omar! Everyone here is related so all they had to ask was ‘where do Ann and Omar live?!’ Simple!!!

A day later I received a follow up call from the hospital to see if everything was alright. They had sent their mobile unit to treat the animal as they have units all over Luxor. While they were treating the donkey they took photos and sent them to me this morning.

They provide a very caring service and have a very dedicated team of animal welfare officers. My husband had to rethink his ideas about the charity as he realised that some people do actually care and are not just out there to exploit and con the local people.

He realised that  there are caring, honest people here in Luxor who really do care about the welfare of the people and their animals. So now if it ever happens again he will be the first to ring for help! Some of the attitude is also about valuing a good working animal. If the animal provides a good service to humans then it is only right and fair that they should be taken care of when they need it.

So now Brian is eating and resting and soon will be as good as new. The Brookes Hospital for Animals was started in the 1960’s and has been running ever since. They operate over 7 regions all over Egypt and have static clinics as well as mobile veterinary units. The founder, Dorothy Brooke, moved to Cairo in 1930 and saw the thousands of emaciated ex-war horses which had been sold to the Egyptians by the British Army at the end of the first world war. They lived a life of very hard labour so in 1934 she established the old war horse Memorial Hospital which was to provide veterinary care to war horses, mules and donkeys.  Today it is a busy treatment centre and the base for the mobile units in Cairo.

The centre here in Luxor was established in 1966 and is obviously a great success. I imagine that when Dorothy started her clinic in Cairo she never imagined that it would spread all over Egypt and then to other countries.

2 responses to “The Brookes Experience.”